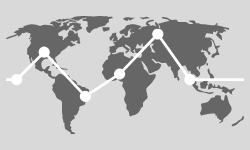 Last month we sent our lead developer to Unite 2018 Berlin. In light of the conference there are clear indications of two augmented reality trends; to create multi-user AR experiences with the effect of increasing global connectivity. This is an interesting concept considering augmented reality (and virtual reality) has, up until this point, been a relatively isolated technology.

It appears that AR is evolving. But is it finally reaching maturity? Or is there still a way to go in augmented reality development before we see this technology used to the best of its potential? To answer these questions lets first look at some key findings from Unite 2018 and how this leads to increased global connectivity.

Google’s most recent innovation to their ARCore SDK is that of cloud anchors. Typically, anchors allow for a virtual object within an AR scene to stay in place. Cloud anchors, therefore, allow these virtual objects that have been fixed into place with anchors to be available on other devices via the cloud.

The result? Any user, who has a unique ID and is in the same environment, can have a multiplayer experience with their friends, colleagues or fellow developers. Different users can add and render objects to the scene, allowing virtual objects to be interacted with at the same time. Due to the presence of the unique ID the data is not public. The cloud anchor is also only accessible for up to 24 hours after the original anchor is hosted.

(You can find out more here)

Mapbox is well known for providing map data for popular and used applications like Snapchat, WeatherChannel, and National Geographic using an API. The company aims to bring ‘location-based experiences to life’ by creating map orientated AR applications for their clients via their location-based platform.

The platform allows developers to utilize metadata about locations (including land contours and building data) via their API. This allows developers to import and re-create a 3D model of a map from various locations. These maps can then be modified to suit the needs of the developer. Essentially, their platform allows for specific locations to be viewed virtually from other locations. Although this isn’t specifically multi-user, the trend of global augmented reality and global connectivity is most definitely apparent.

Another AR development company, Wolf3D, also has the long-term vision to increase global connectivity. They hope to do this by providing individuals with their own personalized augmented reality avatar that will be used in multi-user communication. Their aim? To ‘create virtual interactions between people that feel like the real deal’.

So what do these augmented reality trends mean for the future?

Thanks to the recent developments in smartphone capability, augmented reality is already coming available to the masses. The main hindrance, however, is that augmented reality is a technology that hasn’t really been accepted into everyday life, besides perhaps Pokemon Go. But what made Pokemon Go so successful? It was both location-based and was the first multi-user AR experience.

Perhaps the answer then, lies within both multi-user and location-based AR. With the rise of both features within AR development, maybe it is appropriate to assume that augmented reality is finally maturing in a way that makes it accessible, inclusive, and accepted by the masses as a beneficial technology. It’s nice to see that other developers are finally jumping onboard with the idea.

Although, as with anything, it can be improved. It will be nice to see even more multi-user AR experiences and location-based AR that really focuses on global connectivity. We at Rise AR are hoping to make a major contribution to the connected AR ecosystem with our SDK, currently under development.

Want to get involved with augmented reality? CONTACT US